What is it we put on pages and why? We all have our motivations, our inner reasons for doing the things we do. 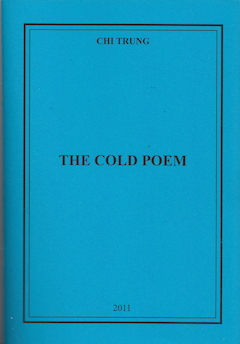 This was not an extremely easy poem/book for me to translate; I was American at the time of the Vietnamese War. This translation touched me. Although I had no say in the matter of the war, this was an oppertunity to give something back, something very tiny, but something.

Published as an author’s chapbook in 2011, this book was created to voice its contents at poetry festivals in a language somewhat more easily understood by the visiting poets and the audience than Vietnamese or German.

Dr. Nguyen Chi Trung has written several volumes of poetry that have been published in Vietnam. One of his works, Winds, has been recently translated into Italian (2014).

Those interested in other works by Dr. Nguyen Chi Trung can find more information under www.nguyenchitrung.com. 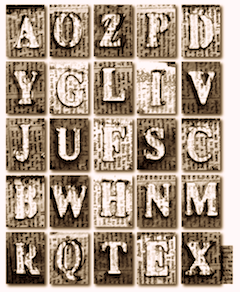 After reading an interview with Bianca Moctezume Barragá in 2001 I had often thought of writing a story about the penacho, a crown made of the tail feathers of the Quetzal bird. This relic of Aztec heritage is here in Vienna (Weltmuseum Wien) instead of adorning its place of honor in the Templo Mayor in Mexico. There has been much controversy with regard to this subject.

Then I went to a workshop held by Helga Anderle in (March 2009) where we met for the first time. Sometime later, Helga, who had already written a story acting on this theme, asked me to translate it for the anthology A World of Crime and Mystery 2010. A few e-mails were exchanged, but, involved in projects as we all are, we often lose touch. I did receive an e-mail telling me it had been accepted, but not that it was actually published.

I created this alphabet of crime some time in 2010. One of the letters has been… 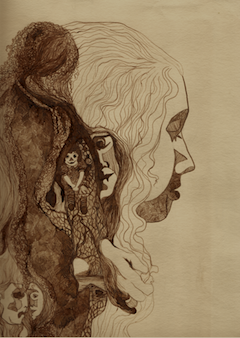 I wrote this story with a specific collection in mind. It was by far not the first short story I had written, but it was one of the earlier ones. The collection is growing.

I did back the sepia ink drawing, on the left, back in the States where the rag doll in this story was born.

Temptation, written in 2004, is the first poem I had published. The reading in Graz was very well organized and the ambient in the kunsthaus-cafe was wonderful. We were asked to present our works in German and English to complement the bilingual edition of clouds | wolken. I read Ka Rudorfer’s translation: verlockung. 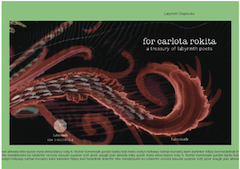 I remember Peter and I waiting for the books that were finished just minutes before we presented Carlotta with them.

This sonnet is for my grandfather.

The whole cover of the chapbook is shown on the left. The color scheme of the original silk painting was digitally manipulated to make this cover. 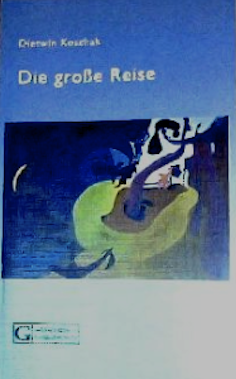 Dietwin Koschak is author and painter. He won the Austrian grant for Literature in 1998. On the left his book, Die große Reise (The great Journey), published in 2005, contains poetry and literary prose.